For over twenty years, the Campaign For Justice: Redress NOW For Japanese Latin Americans! has been the leading advocate for the Japanese Latin American (JLA) redress justice struggle. Through educational outreach and grassroots organizing, the CFJ has helped to inform the public – in the US and internationally – about the WWII internment history and redress efforts of the JLAs so that lessons from the past can be applied to prevent and to secure accountability for present day and future violations of civil and human rights, especially when perpetrated by governments in the name of military necessity and national security. This education and advocacy is an important way that we are building networks and communities of solidarity.

Since 1993, CFJ has participated in or organized over eight community delegations to Washington D.C. to monitor implementation of the Civil Liberties Act of 1988, to support JLA redress litigation (in the U.S. courts and the Inter-American Commission on Human Rights), to promote federal legislation for WWII internees of Japanese, German and Italian ancestry who have been denied redress (Wartime Parity & Justice Act, Japanese Latin American Commission Study Bill, and the Wartime Treatment Study Act), to testify at hearings before a U.S. Congressional subcommittee and the IACHR, and to educate and mobilize public support.  The most recent delegation accompanied former Japanese Peruvian internee Art Shibayama for his testimony at the IACHR public hearing on March 21, 2017.

GETTING THE WORD OUT 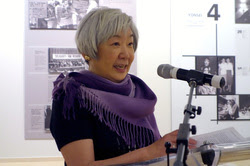 CFJ, together with the Japanese Peruvian Oral History Project (JPOHP) and partner organizations, have organized over 300 educational events, classroom presentations, workshops, and media conferences in the U.S., Canada, Japan, Okinawa, and Peru. CFJ also speaks out at community events (e.g., the upcoming 2018 Day of Remembrance commemorations in San Francisco, San Jose and Portland), at community and academic symposia and conferences (e.g., the upcoming roundtable discussion at the Association of Asian American Studies Conference in San Francisco), and pilgrimages to U.S. WWII incarceration/internment camps.

CFJ and JPOHP are also the main proponents for the documentation, preservation, interpretation, and promotion of the WWII JLA internment and redress history and activism. CFJ and JPOHP have organized collaborative educational projects with diverse communities (Japanese, German, Italian, Arab, Muslim, South Asian, and Latin American) to educate the public and promote multi-community and intergenerational dialogue about the World War II internment of “enemy aliens,” unfinished WWII justice struggles, and concerns for civil liberties and national security in the aftermath of 9/11 and the war on terror.

“The Enemy Alien Files” is a groundbreaking traveling exhibit which focuses on the WWII experience of thousands of Japanese, German and Italian immigrants in the USA and Latin America who experienced arrest, forced relocation, internment and even deportation to war zones solely because of their nationality. The exhibit combines rare photographs, oral history excerpts, documents and artifacts to explore how wartime fears, anti-immigrant attitudes and racism affected men, women and children against whom no charges of wrong-doing were ever brought. A timely and instructional reminder of what can happen in a time of fear and insecurity, this exhibit illuminates disturbing parallels with post 9/11 experiences in Arab, Muslim and South Asian communities all over the U.S. This exhibit was produced by the Enemy Alien Files Consortium, with participation by scholars and community historians from the German, Japanese, Italian and Latin American communities. During the first year of a nationwide tour, an estimated 89,000 people viewed the exhibit and attended exhibit activities in seven venues and over one million people became aware of the exhibit and historical content (through media coverage). 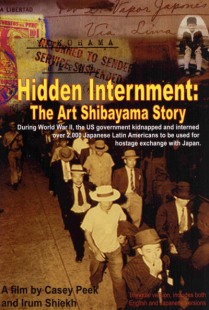 “Hidden Internment” is a documentary which reveals the little-known history of the WWII internment of over 2200 Japanese Latin Americans. Using historic footage and moving interviews, this film centers on the life story of Art Shibayama, who, at age 13, was forcibly deported from his home in Peru with his family and interned in Crystal City, Texas. He and his family were to be used in hostage exchanges for U.S. citizens trapped in war zones abroad. Art’s commitment to truth and justice inspires the ongoing struggle for U.S. government accountability for constitutional and human rights violations.  A project is underway to update this documentary with an overview of redress efforts since 2004, more internee interviews, and translation into Spanish and Portuguese.

Here, In America? The Assembly on the WWII Relocation and Internment of Civilians was a 2-day public testimonial event held in San Francisco at Hastings College of the Law on April 8-9, 2005. This historic grassroots public education forum focused on the personal testimonies of US citizens and immigrants of Japanese, German and Italian ancestry in the US and from Latin America, who are yet to receive proper acknowledgement for the violation of their civil and human rights due to American policies during World War II. The stories of individuals who were interned in Department of Justice camps and Army facilities as part of the enemy alien program were told, along with testimonies of Muslim and Arab Americans who faced similar violations following 9/11. This project involved 64 participants, over 80 volunteers and staff, and 23 endorsing organizations. A proceedings booklet and DVD were produced and distributed to all members of the U.S. Congress and staff of the Inter-American Commission on Human Rights in 2006. The historical information, statements, and insights continue to be significant for current day challenges. 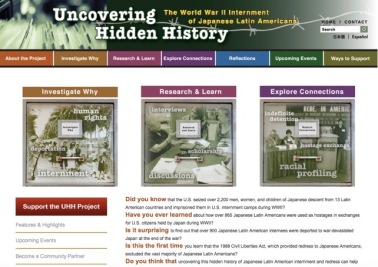 The National Endowment for the Humanities awarded a planning grant to the Japanese Peruvian Oral History Project and National Japanese American Historical Society to create an open-access, interactive digital museum to provide a dynamic introduction to the JLA wartime experience. Showcasing oral histories, photos, documents, and research, JLA wartime and redress experiences will be accessible online to anyone around the world in three languages (English, Spanish, Japanese).

The digital museum will be complemented by a nationwide discussion program to foster dialogue around the central themes: upholding civil liberties and human rights while maintaining national security; the vulnerability of immigrants during war; the importance of hemispheric race- and gender- based ideologies that shaped the trans-American internment programs; and drawing lessons from the experiences of “enemy aliens” in the past to better meet challenges to our civil and human rights in the present.

Volunteers are needed to update and promote our exhibits, videos and other educational materials; collect, transcribe, translate, and digitize oral histories, photos and documents; and fundraise and write grants.