In June 2003, the Shibayama brothers–Isamu Carlos (also known as “Art”), Kenichi Javier, and Takeshi Jorge–filed the Shibayama, et al. v. USA petition, Case No. 12.545, with the Inter-American Commission on Human Rights (IACHR) seeking equitable redress for ongoing violations of their rights by the U.S. government under several articles of the American Convention on the Rights and Duties of Man.

Thirteen years after the initial filing of the petition, an expedited hearing was requested due to the Shibayama brothers’ age and failing health.  A public hearing was granted in January 2017 and scheduled for March 2017.

On March 21, 2017, the public hearing before the IACHR was held at the Organization of American States (OAS) headquarters in Washington, D.C.  A video of the hearing is available, courtesy of the IACHR (with an introduction in Spanish and the remainder in English):

Those in attendance included: 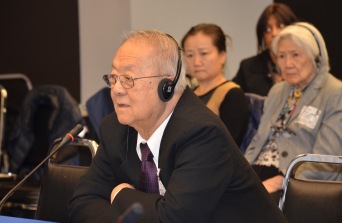 No attorneys from the U.S. government appeared at the hearing nor other IACHR hearings on March 21st, which raised concerns from the ACLU and other civil and human rights organizations regarding the United States’ commitment to human rights leadership in the Americas.

READ MORE on the IACHR hearing

The large body of evidence that supported the Shibayama claims was irrefutable, leading the IACHR decision to read:

“The Inter-American Commission on Human Rights concludes that the [USA] is responsible for the violation of Articles II (equality before the law) and XVIII (fair trial and effective remedy) of the American Declaration [of the Rights and Duties of Man]….

And reiterates its recommendations to the USA to:

(1) provide integral reparation for the human rights violations…including both the material and moral dimensions, and adopt measures for economic compensation and measures of satisfaction….[and]

(2) ensure full disclosure of government information relating to the program of deportation and internment of JLAs during WWII, as well as relating to the fates of the individuals subject to this program.”

Note: For more information on these and other issues, please see Michi Weglyn’s Years of Infamy, C. Harvey Gardiner’s Pawns in a Triangle of Hate, https://jlacampaignforjustice.org/resources/ and http://encyclopedia.densho.org/Japanese_Latin_Americans/.

Q. What happened to the JLAs during World War II?

From December 1941 to February 1948, the U.S. government orchestrated and financed the mass abduction, forcible deportation and internment of 2,264 men, women, and children of Japanese ancestry from 13 Latin American countries. Stripped of their passports en route to the United States, these Japanese Latin Americans (JLAs) were declared “illegal aliens” upon arrival in the U.S.

The U.S. planned to use them as hostages in exchange for Americans held by Japan during World War II. Over 800 JLAs were included in two prisoner of war exchanges between the U.S. and Japan. The remaining JLAs were imprisoned without due process of law in U.S. Department of Justice internment camps until after the end of the war.

The wartime treatment of JLAs was part of a larger “enemy alien” program which also targeted people of German and Italian descent in the U.S. and from Latin America. Over 31,000 of these enemy aliens were apprehended, thousands were put into internment camps, and over 4800 (including U.S. citizens who were the minor children of resident aliens) were forcibly deported in civilian prisoner exchanges. The net effect of these programs was to leave JLAs in an indeterminate status so that they could be deprived of individual due process rights, separated from their families,  and kept in inhumane living conditions behind barbed wire.

Q: What countries were involved in the hostage exchange program?

A: The United States and 13 Latin American countries

Q: How many Japanese Latin Americans were apprehended, deported to and interned in the United States?

2264 men, women and children of Japanese ancestry, citizens and permanent residents of 13 Latin American countries were apprehended, deported to and interned in the U.S.

At least 331 men were also interned at the U.S. military base in Panama. Some were forced to perform hard labor before being sent to internment camps in the U.S.

7 persons died while in custody between 12/41 and 2/27/48 (when Crystal City Internment Camp officially closed).

Q. How many Japanese Latin Americans were exchanged during WWII?

Q. What happened to the Japanese Latin Americans who were still interned at the end of WWII?

112 Japanese Bolivians, Costa Ricans and Ecuadorans are assumed to have been deported to Japan at the end of WWII.

945+ Japanese Peruvians were deported to Japan at the end of WWII.

365 Japanese Peruvians remained in the US to fight for the suspension of deportation, with hopes of returning to their homes in Peru. Of these, about 300 Japanese Peruvians were able to resolve their “illegal alien” status in the 1950s and eventually become US permanent residents or naturalized citizens.

Eventually, about 100 Japanese Peruvians were able to return to Peru.

Q. What is the history of the JLA campaign for justice?

The U.S. Justice Department ruled that JLAs were not eligible for redress under the Civil Liberties Act of 1988. Therefore, between 1996 and 1999, five lawsuits were filed on behalf of the former JLA internees. The Mochizuki, et al. v. USA case resulted in a settlement whereby the US government agreed to issue individual apology letters and compensation of $5,000 per internee. While the settlement agreement terminated further litigation, there was a provision that specifically provided for the pursuit of legislation for equitable relief in the U.S. Congress. The other four lawsuits were dismissed by the U.S. courts.

For the JLA internees who rejected the Mochizuki settlement and were unable to secure justice in the U.S. courts, they continued the struggle in the international arena. In June 2003, a petition on behalf of the JLAs was filed with the Inter-American Commission on Human Rights (IACHR, a body of the Organization of American States) to hold the U.S. government accountable for the ongoing failure to provide redress for war crimes and crimes against humanity. It is this case (Shibayama versus United States) that has just yielded a significant victory for the JLAs.

On the legislative front, two bills to support a commission to study the case for JLA redress did not emerge from legislative committees in the early 2000s.

Q. What if the United States Government does not comply with the decision of the Inter-American Commission on Human Rights (IACHR)?

The IACHR uses the power of persuasion to encourage governments in the Western Hemisphere to meet with citizens of their own nations to discuss how violations of human rights, which the IACHR has found credible, can be properly redressed. The IACHR does not have the power of sanctions or fines like a domestic U.S. court in a comparable domestic legal dispute.

In the Shibayama case, the IACHR is encouraging the Trump Administration to meet with representatives of the Shibayamas to discuss how to properly redress the JLAs. This redress could include a monetary settlement and other remedies awarded the Japanese Americans by the Civil Liberties Act of 1988, but there is no express limitation of this kind in the IACHR ruling. In addition, JLAs are very interested in using this settlement to open the records so that the full extent of the U.S. government’s actions before, during and after World War II can be examined by JLA family members, scholars, and others interested in this shameful chapter in U.S. history.

Q. Why is the JLA victory in the IACHR important today?

After the tragedies of 9/11 and the Trump Administration’s targeting of immigrants, refugees, Arabs, Muslims, South Asians, and others, it is extremely important that we learn from historic injustices and create such a high bar to their recurrence that the chances of others suffering the fate of the JLAs never happens again. Indeed, the separation of refugee children from their parents that is occurring today in I.C.E. facilities replicates a sad aspect of the JLA experience during World War II. Federal officers in unmarked cars and wearing no identification who are grabbing and detaining people off the street in Portland today are committing acts similar to those committed against JLAs in Latin American countries during World War II.

In sum, the IACHR victory in the Shibayama case is a tremendous and long overdue victory for the JLA community. But it also is a great victory for every person who values the rule of law over state-sponsored lawlessness, and the right of each of us to be treated as an individual, and not presumed guilty because of one’s country of origin.

The coram nobis legal teams applaud the decision of the Inter-American Commission on Human Rights (IACHR) vindicating the Shibayama family’s decades-long struggle for justice for the more than 2,200 Japanese Latin Americans kidnapped or forcibly expelled from their homes in over 13 Central and South American countries during WWII, and then imprisoned by the United States for prisoner exchanges with Japan. While unable to directly address these original wrongs, the IACHR found that the US government’s refusal to adequately address and redress those wrongs violated internationally recognized human rights. The IACHR held that Congress’s “exclusion of [Japanese Latin Americans] from receiving reparations under the [Civil Liberties Act of 1988] constitutes a clear violation of their right to equality before the law,” particularly since it had recognized the “fundamental injustice” of the wartime internment itself. The IACHR also held the US’s judicial remedies wanting in light of the gravity of the wrongs, finding them “incapable” of adequately remedying the Shibayama family’s constitutional and international law challenges to their kidnapping and incarceration.

In the 1980s, Japanese Americans forcibly removed from their homes and interned for the duration of WWII secured a measure of justice through the 1988 Civil Liberties Act, and our clients, Gordon Hirabayashi, Minoru Yasui and Fred Korematsu, also secured justice through their coram nobis actions for the government’s deliberate fraud on the Supreme Court in order to secure favorable rulings against their constitutional challenges to the internment. With the IACHR’s ruling, Japanese Latin Americans have also secured a long overdue measure of justice, which the US should honor by appropriate redress commensurate with the wrong. In a time when fundamental human rights are threatened here at home and worldwide, the IACHR’s decision offers hope that justice for all those unjustly persecuted and oppressed will still prevail. With that hope, we celebrate this victory in honor of the Shibayama family’s and all Japanese Latin Americans’ dedication to human rights.