Campaign for Justice and Japanese Peruvian Oral History Project are thrilled to announce the groundbreaking ruling of the Inter-American Commission on Human Rights (IACHR). Many thanks to all who helped with this milestone victory. 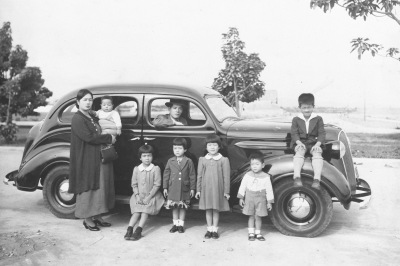 The Shibayama family owned thriving businesses and were enjoying a prosperous, peaceful lifestyle in Lima, Peru.  Their lives changed drastically during WWII when the family was kidnapped in Lima by the U.S. government, transported forcibly across international waters and imprisoned at Crystal City Internment Camp in Texas from March 1944 to September 1946.  They lost everything — their home, businesses, property, community and country.

The Shibayamas, along with more than 2,200 other Latin Americans of Japanese descent, were seized for the purpose of hostage exchange with Japan.  The Shibayama children, who were born in Peru, ranged in age from 5 to 13 years old.  Their beloved grandparents were used by the U.S. government in a hostage exchange and sent to war-devastated Japan, and the family never saw them again.

After the war ended, the Shibayamas were classified as “illegal aliens” and forced to fight deportation from the U.S. when Peru would not allow their return.

Not finding justice for the war crimes and crimes of humanity committed against them in the U.S. courts nor Congress, Isamu Carlos “Art,” Kenichi Javier and Takeshi Jorge Shibayama took their case to the international arena.

In June 2003, the Shibayama brothers and the Japanese Peruvian Oral History Project filed the Shibayama, et al. v. USA petition, Case No. 12.545, with the Inter-American Commission on Human Rights (IACHR) seeking equitable redress for ongoing violations of their rights by the U.S. government under several articles of the American Convention on the Rights and Duties of Man.

Thirteen years after the initial filing, an expedited hearing was requested due to the Shibayama brothers’ age and failing health.  A public hearing was granted in January 2017 and scheduled for March 2017.

On March 21, 2017, the public hearing before the IACHR was held at the Organization of American States (OAS) headquarters in Washington, D.C.  A video of the hearing is available, courtesy of the IACHR (with an introduction in Spanish and the remainder in English):

No attorneys from the U.S. government appeared at the hearing nor other IACHR hearings on March 21st, which raised concerns from the ACLU and other civil and human rights organizations regarding the United States’ commitment to human rights leadership in the Americas.

Read more on the IACHR hearing.

The large body of evidence that supported the Shibayama claims was irrefutable, leading the IACHR decision to read:

“The Inter-American Commission on Human Rights concludes that the [USA] is responsible for the violation of Articles II (equality before the law) and XVIII (fair trial and effective remedy) of the American Declaration [of the Rights and Duties of Man]…And reiterates its recommendations to the USA to:

(1) provide integral reparation for the human rights violations…including both the material and moral dimensions, and adopt measures for economic compensation and measures of satisfaction…[and]

(2) ensure full disclosure of government information relating to the program of deportation and internment of JLAs during WWII, as well as relating to the fates of the individuals subject to this program.”

Links to additional information on the IACHR ruling:

NEXT STEPS FOR REDRESS

As of today, the Trump and Biden Administrations have refused to comply with the IACHR’s ruling.  Our next steps include the following:

Volunteers and donations to assist with our efforts are welcome!  Learn more